Access your free preview of
Connected: Catholic Social Teaching for This Generation below

Before you go ... here is what comes next.

Who Else Wants a Room Full of Religious Education Students
Who Can’t Wait for Their Turn to Join the Conversation?

Let me give you a glimpse into the future.

Every single kid in your religious education class shows up … every week.

But it gets better.

They don’t just show up.

They show up early.

They stay for a few minutes after, just talking with the other kids. Laughing.

During your class they ask great questions. Questions that show you that they’re thinking about these things during the week, between classes.

The discussions you have are lively and deep.

You talk about those big, BIG questions that lie right at the core of who a person is.

The kids initiate important conversations. They want to talk about what their lives will be about.

They want to talk about where they came from and where they’re going.

They open up to you and the others in the class.

Their voices might quaver a bit when they do (but only because this is the first time a lot of them have ever talked about any of this, and that can be scary).

And you can feel it in the energy in the room.

The Holy Spirit is there.

And the kids notice it too.

There is something going on in your classroom. Hearts are being touched. Lives are changing.

It’s the gospel, breaking through the noise and taking root in their souls.

Praise God, you get to be a part of it.

The Struggle Is Real

Now, you might have been reading that and thinking “If only.”

Because religious education with today’s teens can often feel like you’re pulling teeth.

First you need to get them to show up at all, navigating sports schedules, play rehearsals, music concerts, and other extracurricular activities.

Once you clear that hurdle, they’re in your classroom but under duress.

Some of them might just openly tell you they’re being forced to be there.

(Have you had any of those?)

So what do they do?

They glue their eyes to their phones.

Or maybe they act up and make it hard to stay on topic.

Or worse … they don’t do anything at all.

They might as well have not shown up in the first place.

It can be exhausting. You spend your nights looking for help. Ice-breakers. Activities. Special, secret discussion questions that will get them to open up.

It can be so tempting to give in to discouragement. And a lot of days, you might find yourself on the edge of tears, you’re so frustrated.

Don’t You Believe It

When we talk to folks about getting their religious education students to engage, there are a couple things we usually hear.

Thing #1: They won’t pay attention, because I’m not interesting enough.

This is a lie.

It comes from Satan.

Imagine this instead: You’re a snake antivenom expert.

You know everything there is to know about snakes, their venom, and how to combat that venom.

Wherever you go, you bring vials and vials of different snake antivenom on the off chance that someone you’re with will be bitten by a snake.

Then one day it happens.

You’re on a hike, and you come across a woman who has been bitten by a snake, and she needs help.

Not just any help. Your help.

Before you can figure out which antivenom to give her, you need her to answer a few questions:

Before you give her anything, you NEED her to answer those questions.

But here’s the problem: She’s on her phone trying to figure out what to do for a snake-bite …

Can you get her attention?

And when you get her attention …

Will she be interested in what you have to say?

People are by nature self-interested.

They want the answers to their questions.

They want the solutions to their problems.

(And you better believe they have problems. They’ve been poisoned, but by sin. And it’s killing them just as surely as any snakebite.)

They want to be healed.

But notice that, in the example, your ability to help depends on the woman telling you about her situation.

If we talk about their concerns, we can get students to engage.

Which brings us to the second thing we hear.

Thing #2: They won’t pay attention, because they think religion is boring.

They think religion is boring.

We don’t think so.

(And if you’re still reading, we suspect you don’t think so either.)

Do you know what subject most people would find pretty dry and boring?

An expert on snake venom could ruin a nice dinner party.

But do you know that there is a small subset of people who find themselves extremely interested in how snake venom works?

People who have recently been bitten by snakes.

In fact, the more recent the bite, the more interested they’re likely to be.

(That includes your religious education students.)

We all experience the consequences of sin.

We’re all suffering the pain of the wounds we cause and others cause us through sin.

We’ve all been bitten by snakes.

But through Christ, we also have the cure.

Now … we do need to add a “however” at this point.

You see, before they can hear, first they need to pay attention.

We need them to engage.

If you’ve been sticking with the same religious education approach for the last few years, you’ve probably been seeing what everyone has …

… it isn’t working as well as it used to.

The kids we’re talking to today aren’t like the kids from ten or even five years ago.

These days, we’re seeing a huge rise in teen anxiety. Among all the other issues this causes, their anxiety is going to make it even harder for your message to get through.

When you have anxiety, you’re in a heightened state of defensiveness. Everything you see or hear is being filtered aggressively for threats.

Earning teens’ trust is more important (and harder) than ever.

That is why we have to change our approach to religious education. Something that might have worked and resonated not long ago will fail to get through to them today.

More specifically, technology use by those kids in your classroom.

You’ve probably already seen this in living color. Kids have trouble putting their phones away during your class.

Their attention spans are almost nonexistent.

Everyone who works with teens sees this.

When you spend a significant amount of time enjoying TV or video game entertainment, where the stimulation is immediate and effortless, it can be a real challenge to pay attention in real life.

That goes double for a subject you aren’t already interested in.

So what’s the takeaway?

We need to change what we’re doing. We need to try something new. Because the news isn’t all bad!

Studies have shown that there are things that kids do care about! (Imagine that!)

What are these things?

They want people to be treated well.

They want to see a more peaceful world.

They care about justice and fairness.

Regardless of how you might feel about these issues, the data is clear: Teens care.

We need to adapt to this and take advantage of this opportunity.

We have our work cut out for us

Listen, we know this is a lot to deal with.

Navigating all of this on your own can be an incredibly frustrating and lonely ordeal.

And you might be sitting there thinking, “How am I supposed to compete with all of that? I’m not even that good a public speaker!”

Well … since you asked.

Connected is a five-session program that takes your teens’ interest in social justice issues (like the ones we just told you they actually care about!) and directs it back to the timeless truth and beauty of our Catholic faith.

The program shares clear, compelling, authentic Catholic teaching and has been granted a nihil obstat and imprimatur. 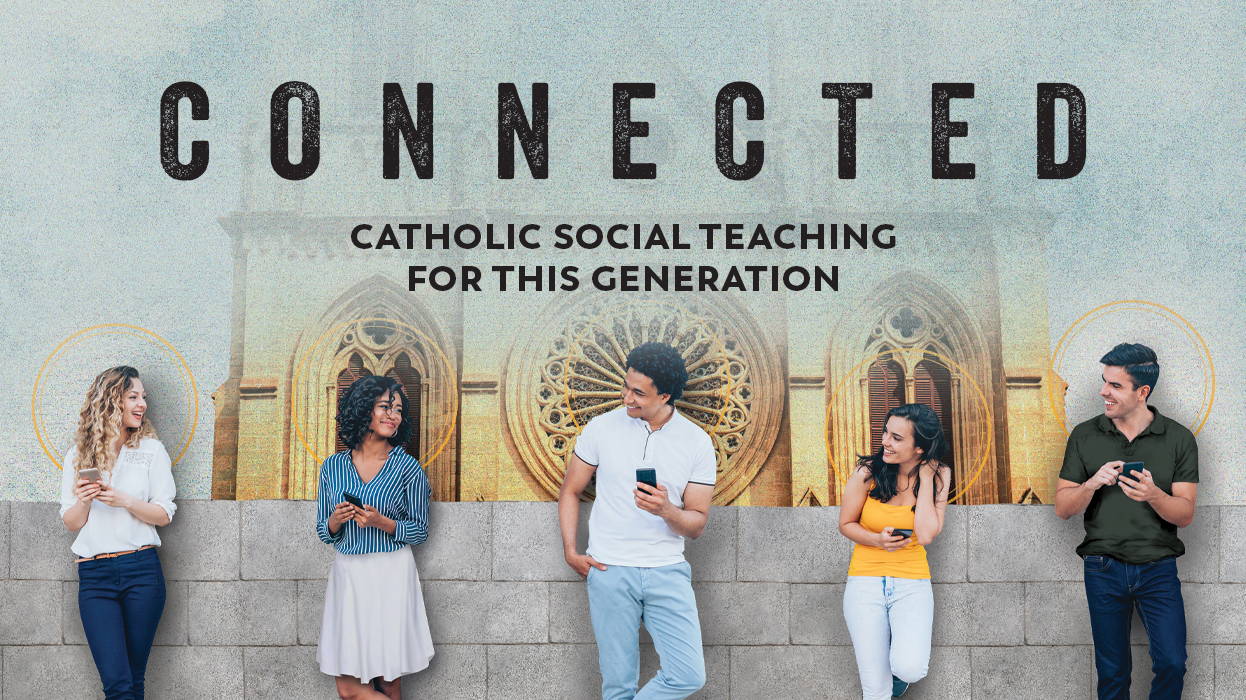 Sister Marie Pappas is the associate superintendent of schools for the Archdiocese of New York and host of the Pathways of Learning radio show on Sirius XM. When she saw the program, she said,

“In these times, we are tempted to give up hope, hope that we can realize the vision of the gospel of Jesus Christ. But Mari Pablo and her colleagues from Ascension Press are not daunted. These daring, faith-filled, passionate young adults are determined to raise up Gospel revolutionaries.”

Here is what will happen when you bring Connected to your religious education program:

To get all of this, order a starter pack for Connected: Catholic Social Teaching for This Generation by clicking the button below. 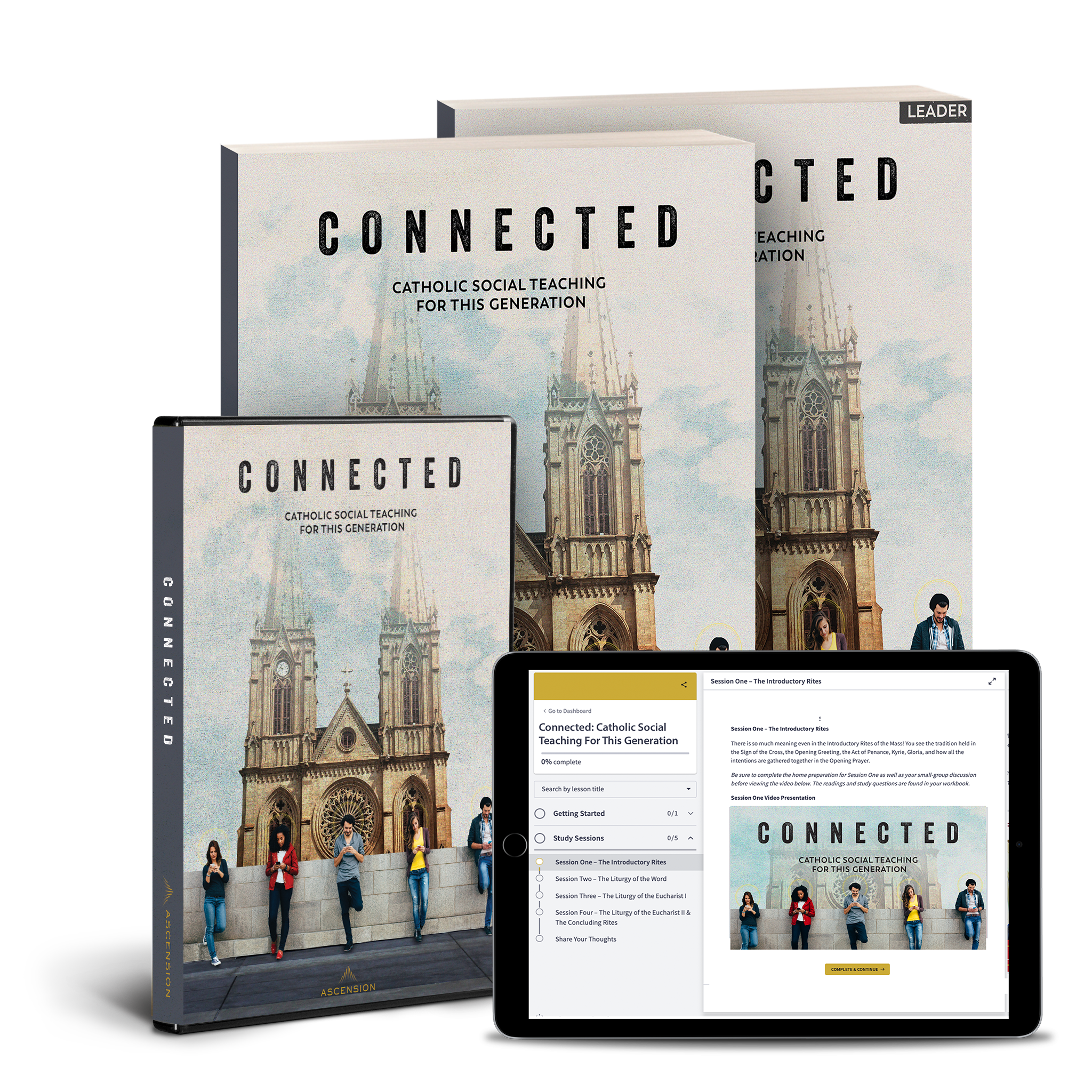 For more than 20 years, parishes around the country have trusted Ascension to provide top-quality Catholic faith formation materials.

You're probably already familiar with some of our popular and award-winning programs, such as

Connected: Catholic Social Teaching for This Generation is our latest program.

You can order it at the link below.

You have absolutely no risk. If you order Connected and find you don’t like it, just contact us within 30 days for a full refund on the cost of your item.

There is absolutely nothing to worry about.

What You Will Receive in the Connected: Catholic Social Teaching for This Generation Starter Pack

*Price if item is purchased separately.